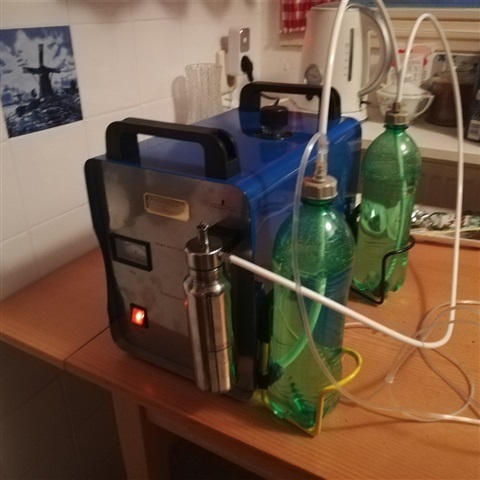 George Wiseman is renowned Canadian researcher in Browns gas and a builder of Browns gas generators.

Excerpt of the post below: ....My arthritis is gone (no pain or swelling). My psoriasis is gone. (had it thick on elbows, knees and feet). My loud tinnitus is now silent (except a bit when I’m stressed)......

Inhalation of watergas seems to have many therapeutical applications. Recently a medical researcher published a book on watergas treatment for COVID19! IT IS REALLY IMPORTANT TO TAKE UP MORE RESEARCH IN EUROPE ON MEDICAL EFFECTS OF WATERGAS!

The message of George Wiseman is just another indication that water and hydrogen is of paramount importance to keep our body in shape. Remember: we are water-electric beings. At least start your day drinking a full glass of fresh water. Water is a source of energy to your body!

WOW, so much happening now in the ‘Hydrogen for Health’ application.

So many people jumping onto the bandwagon (just as I predicted two years ago) and so MUCH new information (scientific studies) showing the efficacy of Hydrogen for Health.

But even so, we are STILL far ahead of the pack because we are producing BROWN’S GAS (aka HydrOxy or HHO) which is better for health because of it’s TRIFECTA of gasses.

The basic facts are:

So HYDROGEN is our major macro-nutrient. Our bodies are built with it and it’s involved (in some way) in every chemical reaction in our body.

This FACT has evaded medical science (and nutritionalists) for centuries… Until NOW!

Now they are learning… And you’ll soon see it everywhere that used to say ‘alkaline’ because it wasn’t the pH that was healthful, it was the HYDROGEN! This has now been very well proved scientifically.

… so even though we are eating food, we are NOT getting the hydrogen we need…

… and we are starving to death (most disease and aging are proving to be caused by or exacerbated by LACK of hydrogen).

So (while every body is different) the effect of chronic lack of hydrogen (which is de-hydration in the most basic sense), is that the body shuts down ‘extraneous’ systems in a desperate attempt to survive.

The first to be shut down seems to be the body’s regeneration system, so you scar instead of heal (no skin stem cells to make new skin). The body ‘patches’ the wound instead of actually healing.

If a person has a scar anywhere on their body, that’s a sign that they are hydrogen deficient.

If a person has any illness, they are likely hydrogen deficient.

The next to shut down is usually the immune systems (which ones depend on the body; every body is different). So people get sick in lots of different ways.

Then the organs start to fail. The body does the best it can to keep you alive but there’s only so much it can do without proper nutrition.

A Japanese Study of families that has members live long (over a century) compared to families that die young strongly indicated that people who have lots of hydrogen in their bodies live the longest HEALTHIEST.

Many animal studies show a 30% to 50% healthful life extension with hydrogen supplementation.

All the above is important but the KEY thing I’m talking about today is WHY Brown’s Gas (HydrOxy or HHO) is better than pure hydrogen.

The main difference is the Electrically Expanded Water (ExW). ExW is a negative charged (has extra electrons) plasma form of water. Brown’s Gas is the ONLY way I know of to get ExW into your body efficiently.

Hydrogen is good and needed, as the body’s main nutritional building block element, but it is nothing without ENERGY. Bodies need ENERGY to heal.

When sick, the body’s energy generation systems are often compromised and the energy reserves are usually drained.

It turns out that the electrons in ExW are bio-available, so gives the body energy that it does not need to ‘work’ for.

To heal, the body needs hydrogen and ENERGY. Brown’s Gas provides both.

One BIG indicator that the BG is BETTER, is that the scars disappear from the bodies of people breathing BG. Many of our customers are reporting this effect.

The ONLY way this could happen is if the body’s regeneration system comes back online.

To heal scars, you need stem cells. The skin is the body’s largest organ and (with Brown’s Gas) it heals visibly. Imagine what is happening to all the other organs inside.

* I haven’t bee sick since I started drinking BG bubbled water in 2005.
* My scars are gone. I grew up on a cattle ranch and had plenty of scars. When my Dad called to wish me Happy New Year, he mentioned that his scars are disappearing too. I’d given him a BG machine because I’d like him to live long and healthy… and I never told him to expect scars disappearing… He told ME!
* My warts are gone (my immune system got strong enough to kill viruses that I’d had since childhood).
* My neuropathies are gone (my left hand and shins were numb and it was spreading). I have full feeling back everywhere (nerve regeneration).*
* My arthritis is gone (no pain or swelling).
* My psoriasis is gone. (had it thick on elbows, knees and feet).
* My loud tinnitus is now silent (except a bit when I’m stressed).
* My hair is growing back (slowly).
* My heart murmur is GONE (had it from childhood).

Many people are telling me that the AquaCure is too expensive for them. I understand completely. I know what it is to live on a limited income (I lived on less than $300 a month for several years in my youth). I still have a mortgage and bills to pay every month…

I’m trying to find ways to either reduce the price of get some sort of rental or financing going. Not much luck so far, but I’m staying on it. God will provide.

In the meantime I have two options to offer you today.

First is a limited number of new machines that I’ll sell for $1800 each (the normal refurbished machine price).

Second is a bigger deal on cosmetically challenged and refurbished AquaCures. Instead of the normal $1800, I’ll sell what I have now for $1500. Again it’s a limited volume. First come, first serve.

The refurbished units have FULL warranty and satisfaction guarantee, just like the new units. They just have cosmetic issues (stains, dents, scratches, etc.) that prevent me from selling them as ‘new’.

To purchase, you’d go to the AquaCure sales page, put the AquaCure in your shopping cart and check out normally.

As you check out you’ll see a place to put a coupon code.

After putting in the code, press the validate button and check the price at the bottom of the page to see that the price dropped appropriately.

If the price doesn’t drop, then the limited number of qualifying AquaCures has been depleted.

Then continue the checkout process.

May the blessings be.